Ventilation and Cooling of large Motors and Generators

The asynchronous and synchronous rotating electrical machines have the same stator composition: a wound stator core composed of core sheet layers embodies grooves in which copper layers are regularly placed throughout the circumferential extent. The winding coil is isolated according to the its voltage and isolation classes. These copper layers are connected in three phase-windings. The parts of the winding emerging from the stator core, also called core ends, are connected through a terminal box to the electrical network. The core ends are supported by complex mechanics and reinforced among each other. This ensures that mechanical stresses do not provoke any deterioration even in exceptional situations. It is highly challenging to perform CFD-calculations for these geometries. 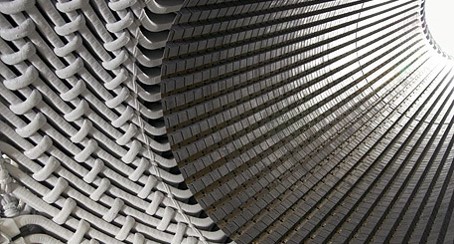 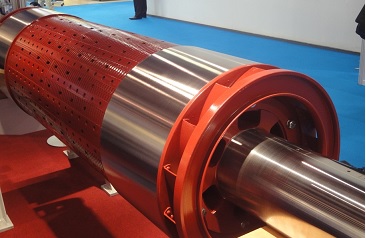 Large machines need a cooling concept with fans to force the cooling medium through the machine. The fans can be either externally driven with an electrical motor or internally driven by the machine shaft. The fans must follow strong requirements regarding noise. Well-dimensioned fans not only reduce the procurement costs, they also allow lower power consumption.

The cooling medium takes the losses produced in the machine and removes them. The most widely available cooling medium is air, and accordingly, air is used for most of electrical motors and generators. Hydrogen under pressure reaches a significantly better heat transfer coefficient. The hydrogen must, however, be enclosed in a pressure safe casing due to the risk of the production of explosive gas. Large turbo generators are cooled with hydrogen. Demineralized treated water is very effective for stator cooling, however a water-cooled stator is difficult to construct and to operate, so water is used only for very large generators. Instead, oil is more commonly used for the cooling of transformers.