Ventilation and Cooling of electrical cabinets with CFD

The power generation from wind turbines and photovoltaics, the charging of electric cars, as well as the power supply and control of locomotives always require conversion between direct current and alternating current. The rectifiers and inverters are assembled in cabinets together with ohmic, capacitive and inductive components. Battery storage can be installed in the lower area of the cabinet.

In 2021, 80% of electric cars were charged at home or at work from a conventional socket using an AC/DC converter. Fast charging stations are designed for longer distances so that electric vehicles can be charged with high power in a short time. The charging infrastructures have to be available across the board. Charging stations are supplied with 220 V AC on the input side; a higher voltage supply such as 690 V AC or 800 V AC would make more sense, but that would require extra wiring to be built and licensed. An essential task of the charging station is therefore to increase the voltage. Silicon Carbide (SiC) MOSFETs have largely replaced IGBTs because they have faster switching speeds and lower switching losses. Several charging modules can be assembled in one cabinet to supply several cars at the same time.

Maintenance-free systems are desired. The filters prevent dust and dirt from being sucked into the cabinet. Nevertheless, the filters become dirty and must be replaced or cleaned regularly. Clean filters already cause high-pressure losses, and dirty filters even more. 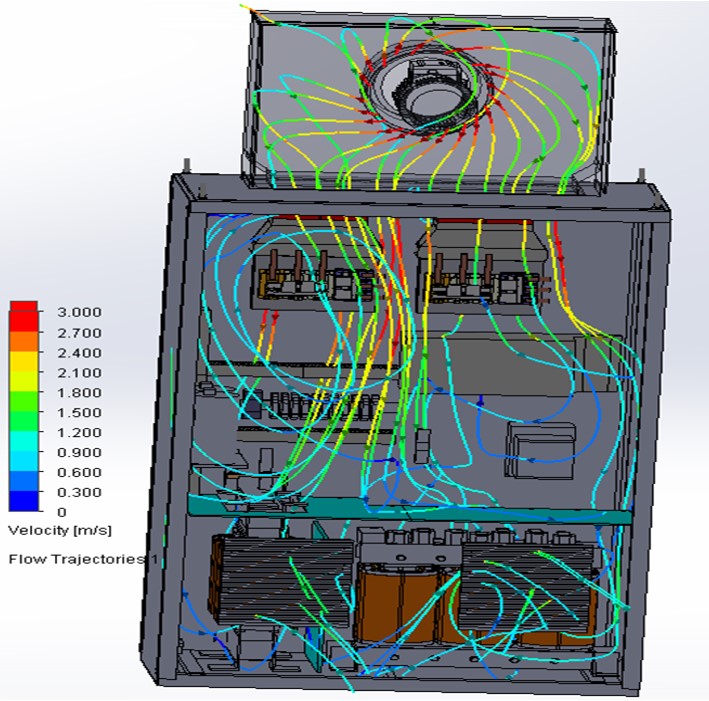 Streamlines in the enclosure of a frequency converter

Many components come in the cabinet in addition to the rectifiers and inverters: transformers, coils, resistors, line filters, switches and cables. We wish to ventilate all components that produce losses. The rectifiers and inverters often have their own ventilation with axial fans or a water circuit. It is often difficult to maintain the minimum clearances before and after the fans. Often the distances are not adhered; although in other areas such as electromagnetic compatibility or filtering the air, the rules are strictly observed.

The fans are not fully simulated with the rotation of the blades in a conventional flow simulation. Instead, the fan curves (pressure generation vs. volume flow) are specified as input data. The measurements of the curves are according to "ISO 5801 Industrial fans". These curves are usually overly optimistic as they apply under ideal conditions. For normal operation, this curve should typically be derated by 10%. If the distances before and after the fans are not respected, then the curves must be derated by 20% or 30%. Even with these corrections, the measured volume flow in the cabinet is often lower than the calculated one.

Uninterruptible power supply systems are installed in large power plants and data centers to supply the systems with voltage for a short bridging time. Since the batteries are rarely used, the thermal challenge is small.

Inverters and battery storage for photovoltaic

Photovoltaic inverters are used every day. It is therefore particularly important not to exceed the limit temperatures. If the temperatures in the cabinet are too high, the semiconductors are not damaged: the output power of the inverter is reduced by safety mechanisms; the process is called de-rating. The ventilation and cooling design should allow the highest power output even in extreme ambient temperatures and sunshine, without air conditioning, which consumes a lot of electricity. The electricity produced can either be fed into the public grid for a fee or it is stored in an electricity storage system and only used in the evening hours. Now battery storage has become cheaper and electricity from the socket more expensive, which favors independence and self-consumption.

Heat losses from a battery during charging and discharging