For low speeds, the flow particles move according to clearly arranged layers; this is known as laminar flow. For high speeds, the flow is characterized by three-dimensional, stochastic movements, this is called turbulent flow. The speed can be measured as time-dependent but it varies around mean values. By increasing the speed of an originally laminar flow, it will become a turbulent structure after passing a determined value. Through the switching of fans, turbulent flow will rise due to the high speeds as well as the strong swirl. 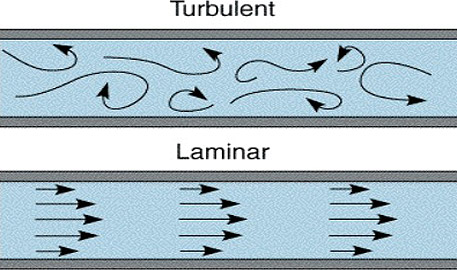 Laminar and turbulent flow in a channel 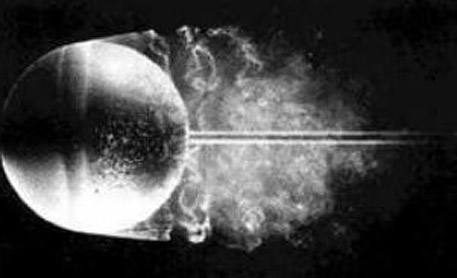 Turbulent flow after a ball

Thermal radiation is an exchange of heat flows between several surfaces that are not in direct contact with one another. Its intensity is defined by the radiation coefficient ε of each surface. The heat density radiated from the surface takes into account the temperature differences to the power of 4. The heat radiation is effective for high temperatures or when there is no forced convection. The heat radiation can be calculated through the setting of the corresponding option in the CFD program. 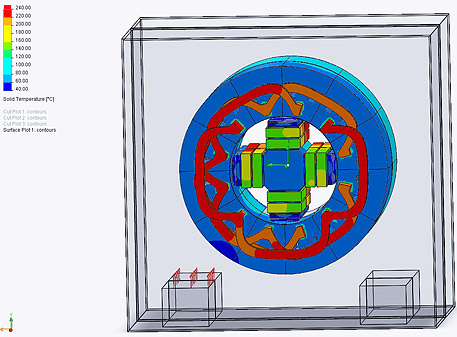 The temperatures in the solids and of the walls are linearly dependent with the conduction, whereas the dependency of wall temperatures and neighbouring cooling fluids are ruled by the convection. Conduction and convection need to be calculated simultaneously; this is called conjugated heat transfer.
Through the setting of the heat transfer option, the energy equation will be solved in addition to the continuity and momentum equations. The energy equation makes the relation between temperature differences, heat fluxes, and velocity gradients.